Reading Club: A Canary for One by Ernest Hemingway

A Canary For One
by Ernest Hemingway 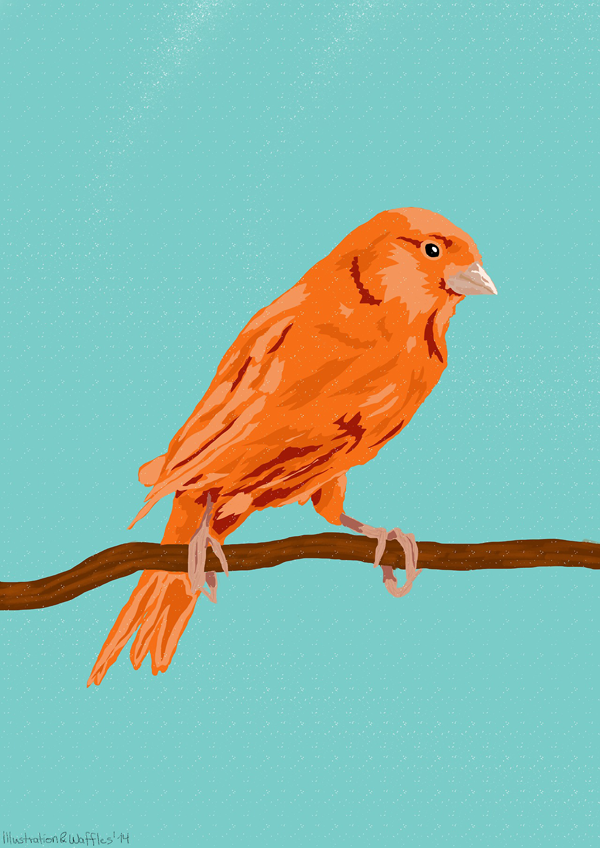 The train passed very quickly a long, red stone house with a garden and four thick palm-trees with tables under them in the shade. On the other side was the sea. Then there was a cutting through red stone and clay, and the sea was only occasionally and far below against rocks.

“I bought him in Palermo,” the American lady said. “We only had an hour ashore and it was Sunday morning. The man wanted to be paid in dollars and I gave him a dollar and a half. He really sings very beautifully.”

It was very hot in the train and it was very hot in the lit salon compartment. There was no breeze came through the open window. The American lady pulled the window-blind down and there was no more sea, even occasionally. On the other side there was glass, then the corridor, then an open window, and outside the window were dusty trees and an oiled road and flat fields of grapes, with gray-stone hills behind them.

There was smoke from many tall chimneys—coming into Marseilles, and the train slowed down and followed one track through many others into the station. The train stayed twenty-five minutes in the station at Marseilles and the American lady bought a copy of The Daily Mail and a half-bottle of Evian water. She walked a little way along the station platform, but she stayed near the steps of the car because at Cannes, where it stopped for twelve minutes, the train had left with no signal of departure and she had gotten on only just in time. The American lady was a little deaf and she was afraid that perhaps signals of departure were given and that she did not hear them.

The train left the station in Marseilles and there was not only the switchyards and the factory smoke but, looking back, the town of Marseilles and the harbor with stone hills behind it and the last of the sun on the water. As it was getting dark the train passed a farmhouse burning in a field. Motor-cars were stopped along the road and bedding and things from inside the farmhouse were spread in the field. Many people were watching the house burn. After it was dark the train was in Avignon. People got on and off. At the news-stand Frenchmen, returning to Paris, bought that day’s French papers. On the station platform were negro soldiers. They wore brown uniforms and were tall and their faces shone, close under the electric light. Their faces were very black and they were too tall to stare. The train left Avignon station with the negroes standing there. A short white sergeant was with them.

Inside the lit salon compartment the porter had pulled down the three beds from inside the wall and prepared them for sleeping. In the night the American lady lay without sleeping because the train was a rapide and went very fast and she was afraid of the speed in the night. The American lady’s bed was the one next to the window. The canary from Palermo, a cloth spread over his cage, was out of the draft in the corridor that went into the compartment wash-room. There was a blue light outside the compartment, and all night the train went very fast and the American lady lay awake and waited for a wreck.

In the morning the train was near Paris, and after the American lady had come out from the wash-room, looking very wholesome and middle-aged and American in spite of not having slept, and had taken the cloth off the birdcage and hung the cage in the sun, she went back to the restaurant-car for breakfast. When she came back to the lit salon compartment again, the beds had been pushed back into the wall and made into seats, the canary was shaking his feathers in the sunlight that came through the open window, and the train was much nearer Paris.

“He loves the sun,” the American lady said. “He’ll sing now in a little while.”

The canary shook his feathers and pecked into them. “I’ve always loved birds,” the American lady said. “I’m taking him home to my little girl. There—he’s singing now.”

The canary chirped and the feathers on his throats stood out, then he dropped his bill and pecked into his feathers again. The train crossed a river and passed through a very carefully tended forest. The train passed through many outside of Paris towns. There were tram-cars in the towns and big advertisements for the Belle Jardini?re and Dubonnet and Pernod on the walls toward the train. All that the train passed through looked as though it were before breakfast. For several minutes I had not listened to the American lady, who was talking to my wife.

“Is your husband American too?” asked the lady.

“I thought you were English.”

“Perhaps that was because I wore braces,” I said. I had started to say suspenders and changed it to braces in the mouth, to keep my English character. The American lady did not hear. She was really quite deaf; she read lips, and I had not looked toward her. I had looked out of the window. She went on talking to my wife.

“I’m so glad you’re Americans. American men make the best husbands,” the American lady was saying. “That was why we left the Continent, you know. My daughter fell in love with a man in Vevey.” She stopped. “They were simply madly in love.” She stopped again. “I took her away, of course.”

“Did she get over it?” asked my wife.

“I don’t think so,” said the American lady. “She wouldn’t eat anything and she wouldn’t sleep at all. I’ve tried so very hard, but she doesn’t seem to take an interest in anything. She doesn’t care about things. I couldn’t have her marrying a foreigner.” She paused. “Some one, a very good friend, told me once, ‘No foreigner can make an American girl a good husband.’”

The American lady admired my wife’s travelling-coat, and it turned out that the American lady had bought her own clothes for twenty years now from the same maison de couture in the Rue Saint Honor?. They had her measurements, and a vendeuse who knew her and her tastes picked the dresses out for her and they were sent to America. They came to the post-office near where she lived up-town in New York, and the duty was never exorbitant because they opened the dresses there in the post-office to appraise them and they were always very simple-looking and with no gold lace nor ornaments that would make the dresses look expensive. Before the present vendeuse, named Th?r?se, there had been another vendeuse, named Am?lie. Altogether there had only been these two in the twenty years. It had always been the same couturier. Prices, however, had gone up. The exchange, though, equalized that. They had her daughter’s measurements now too. She was grown up and there was not much chance of their changing now.

The train was now coming into Paris. The fortifications were levelled but grass had not grown. There were many cars standing on tracks—brown wooden restaurant-cars and brown wooden sleeping-cars that would go to Italy at five o’clock that night, if that train still left at five; the cars were marked Paris-Rome, and cars, with seats on the roofs, that went back and forth to the suburbs with, at certain hours, people in all the seats and on the roofs, if that were the way it were still done, and passing were the white walls and many windows of houses. Nothing had eaten any breakfast.

“Americans make the best husbands,” the American lady said to my wife. I was getting down the bags. “American men are the only men in the world to marry.”

“How long ago did you leave Vevey?” asked my wife.

“Two years ago this fall. It’s her, you know, that I’m taking the canary to.”

“Was the man your daughter was in love with a Swiss?”

“Yes,” said the American lady. “He was from a very good family in Vevey. He was going to be an engineer. They met there in Vevey. They used to go on long walks together.”

“I know Vevey,” said my wife. “We were there on our honeymoon.”

“Were you really? That must have been lovely. I had no idea, of course, that she’d fall in love with him.”

“It was a very lovely place,” said my wife.

“Yes,” said the American lady. “Isn’t it lovely? Where did you stop there?”

“We stayed at the Trois Couronnes,” said my wife.

“It’s such a fine old hotel,” said the American lady.

“Yes,” said my wife. “We had a very fine room and in the fall the country was lovely.”

“Were you there in the fall?”

We were passing three cars that had been in a wreck. They were splintered open and the roofs sagged in.

The American lady looked and saw the last car. “I was afraid of just that all night,” she said. “I have terrific presentiments about things sometimes. I’ll never travel on a rapide again at night. There must be other comfortable trains that don’t go so fast.”

Then the train was in the dark of the Gare de Lyons, and then stopped and porters came up to the windows. I handed bags through the windows, and we were out on the dim longness of the platform, and the American lady put herself in charge of one of three men from Cook’s who said: “Just a moment, madame, and I’ll look for your name.”

We followed the porter with the truck down the long cement platform beside the train. At the end was a gate and a man took the tickets.

We were returning to Paris to set up separate residences.

ex. 1 Give definitions to the following words and expressions. Make up your own sentences with them.
occasionally
compartment
in time/on time
wreck
wholesome
in a little while
to get over
to pick out
exorbitant
to equalize
suburbs
presentiment
to set up
residence

ex. 2 Finish the sentences with your own words.
My friends occasionally...
If you come on time...
She couldn't get over...
I must pick out...
If you set up...
I know it hurts but in a little while...
Suburbs are...
There were exorbitant...
The residence was...