Reading Club: Cat in the Rain by Ernest Hemingway

Ernest Hemingway – ‘Cat in the Rain’ 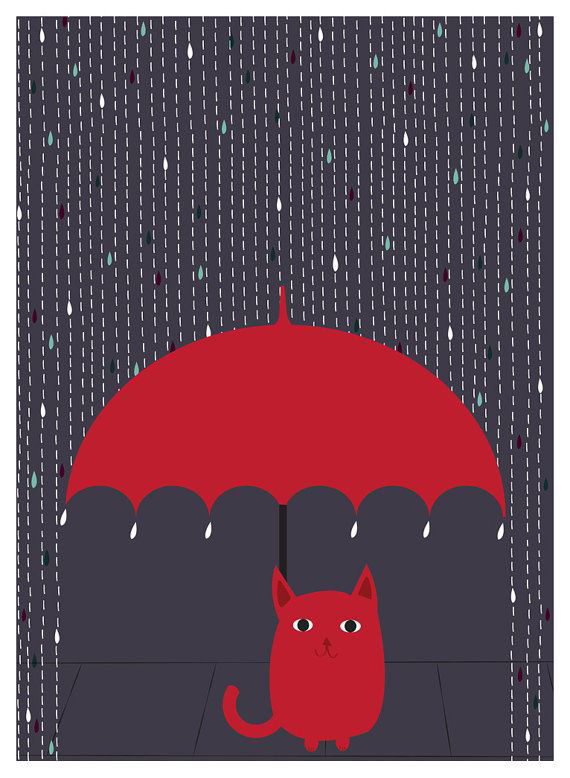 There were only two Americans stopping at the hotel. They did not know any of the people they passed on the stairs on their way to and from their room. Their room was on the second floor facing the sea. It also faced the public garden and the war monument. There were big palms and green benches in the public garden. In the good weather there was always an artist with his easel. Artists liked the way the palms grew and the bright colors of the hotels facing the gardens and the sea. Italians came from a long way off to look up at the war monument. It was made of bronze and glistened in the rain. It was raining. The rain dripped from the palm trees. Water stood in pools on the gravel paths. The sea broke in a long line in the rain and slipped back down the beach to come up and break again in a long line in the rain. The motor cars were gone from the square by the war monument. Across the square in the doorway of the caf? a waiter stood looking out at the empty square.

The American wife stood at the window looking out. Outside right under their window a cat was crouched under one of the dripping green tables. The cat was trying to make herself so compact that she would not be dripped on.

‘I’m going down and get that kitty,’ the American wife said.

‘I’ll do it,’ her husband offered from the bed.

‘No, I’ll get it. The poor kitty out trying to keep dry under a table.’

The husband went on reading, lying propped up with the two pillows at the foot of the bed.

The wife went downstairs and the hotel owner stood up and bowed to her as she passed the office. His desk was at the far end of the office. He was an old man and very tall.

‘Il piove,’ the wife said. She liked the hotel-keeper.

Liking him she opened the door and looked out. It was raining harder. A man in a rubber cape was crossing the empty square to the caf?. The cat would be around to the right. Perhaps she could go along under the eaves.

As she stood in the doorway an umbrella opened behind her. It was the maid who looked after their room.

‘You must not get wet,’ she smiled, speaking Italian. Of course, the hotel-keeper had sent her.

With the maid holding the umbrella over her, she walked along the gravel path until she was under their window. The table was there, washed bright green in the rain, but the cat was gone. She was suddenly disappointed. The maid looked up at her.

‘There was a cat,’ said the American girl.

When she talked English the maid’s face tightened.

‘Come, Signora,’ she said. ‘We must get back inside. You will be wet.’

‘I suppose so,’ said the American girl.

They went back along the gravel path and passed in the door. The maid stayed outside to close the umbrella. As the American girl passed the office, the padrone bowed from his desk. Something felt very small and tight inside the girl. The padrone made her feel very small and at the same time really important. She had a momentary feeling of being of supreme importance. She went on up the stairs.

She opened the door of the room.

George was on the bed, reading.

‘Did you get the cat?’ he asked, putting the book down.

‘Wonder where it went to,’ he said, resting his eyes from reading.

She sat down on the bed.

She went over and sat in front of the mirror of the dressing table looking at herself with the hand glass. She studied her profile, first one side and then the other. Then she studied the back of her head and her neck.

‘Don’t you think it would be a good idea if I let my hair grow out?’ she asked, looking at her profile again.

George looked up and saw the back of her neck, clipped close like a boy’s.

George shifted his position in the bed. He hadn’t looked away from her since she started to speak.

She laid the mirror down on the dresser and went over to the window and looked out. It was getting dark.

‘I want to pull my hair back tight and smooth and make a big knot at the back that I can feel,’ she said. ‘I want to have a kitty to sit on my lap and purr when I stroke her.’

‘Yeah?’ George said from the bed.

‘Oh, shut up and get something to read,’ George said. He was reading again.

His wife was looking out of the window. It was quite dark now and still raining in the palm trees.

George was not listening. He was reading his book. His wife looked out of the window where the light had come on in the square.

Someone knocked at the door.

‘Avanti,’ George said. He looked up from his book.

In the doorway stood the maid. She held a big tortoiseshell cat pressed tight against her and swung down against her body.

‘Excuse me,’ she said, ‘the padrone asked me to bring this for the Signora.’

ex. 1 Define the following words and word combinations. Make up your own sentences with them.
to face
to glisten
easel
compact
dignity
to bow
supreme importance
to shift one's position
clipped

ex. 1 Answer the questions
1. Where was the couple staying? Did they know anybody there?
2. Who usually visited the public garden near the hotel? Why?
3. What was the weather like that day?
4. Was there anybody on the square?
5. What did the American wife see outside?
6. How did her husband react to it? And what did the girl reply?
7. Who did she see when she went downstairs?
8. What did she like about the hotel-keeper?
9. Who opened the umbrella in the doorway for her? Why?
10. Was the cat outside?
11. What did the girl feel when she was going back to her room?
12. What did she say about her hair in the room? What did her husband think about her hair?
13. What else did she want?
14. Who knocked at their door? Why?

ex. 2 Discussion points
1. Describe the setting of the story: the place and the time. Why does the author mention both the artists and the colours in the garden and the war monument? Does it tell anything about the time of the narration?

2. Why doesn't the author set his story on a typical sunny day on vacation? Why rain?

4. Explain the title of the story. Why is it called "Cat in the Rain" not "The Cat in the Rain"? Why is this cat so important to the American wife? Why does the woman sympathize it so much?

6. Why does she have all these different desires? Do you think she is happy? Is he interested in her desires?

7. What was this feeling of "great importance"? How does she feel about the padrone?

8. Do you think it is the same cat? Why did the padrone send the maid with the cat? What kind of a gesture is it?

9. What do you think is going to happen next?