Fight Club (1999)
David Fincher
"Mischief. Mayhem. Soap."
ex. 1 Listen to the audio file "My Daily Routine". What is your daily routine like? Have you ever felt the need for change? What is your dream? How do you want to spend your life if you could do anything in the world?


ex. 2 Express your opinion on the following quotes:
Vocabulary Exercises 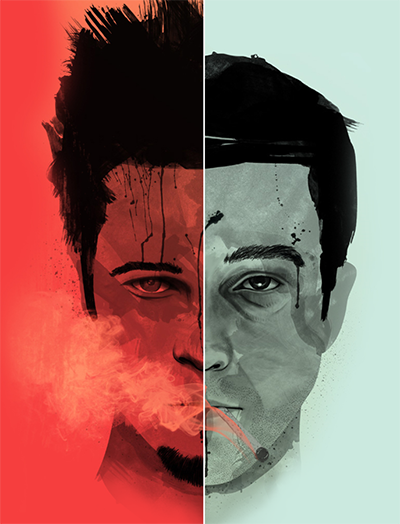 ex. 1 Complete the sentences with these words and expressions
to assume
content
to bail
compliance
to end up doing something
to initiate
euphoric
excessive
to evolve
to feel like doing something
distraction
white collars
self-improvement
to hit bottom
credence
ex. 2 Explain these words and use them in your sentences
alter-ego
excessive
to feel like doing something
to bail
to hit the bottom
euphoric
white collar
ex. 3 Make derivatives
credence
to evolve
compliance
to assume
content
excessive
ex. 4 Find synonyms and opposites for these words
content
self-improvement
to assume
to initiate
to evolve
compliance
ex. 5 Finish the sentences
If you don’t work, you will end up…
If people start rioting, the government will initiate…
Today I don’t feel like…
I think hitting bottom…
It is easy to assume…
You can find distraction…
Self-improvement…
Comprehension Exercises
ex. 1 Give the information about the following heroes of the film
The Narrator
Tyler Durden
Marla Singer
Robert Paulson
ex. 2 Correct the following statements
ex. 3 Answer the questions
ex. 4 Dwell on the following quotations from the film
Narrator: What do you do?
Tyler Durden: What do you mean?
Narrator: What do you do for a living?
Tyler Durden: Why? So you can pretend like you're interested?
Tyler Durden: The things you own end up owning you.
Tyler Durden: Do you know what a duvet is?
Narrator: It's a comforter...
Tyler Durden: It's a blanket. Just a blanket. Now why do guys like you and me know what a duvet is? Is this essential to our survival, in the hunter-gatherer sense of the word? No. What are we then?
Narrator: ...Consumers?
Tyler Durden: Right. We are consumers. We're the bi-products of a lifestyle obsession.
Tyler Durden: It's only after we've lost everything that we're free to do anything.
Tyler Durden: Fuck off with your sofa units and strine green stripe patterns, I say never be complete, I say stop being perfect, I say let... lets evolve, let the chips fall where they may.
Tyler Durden: We're a generation of men raised by women. I'm wondering if another woman is really the answer we need.
Tyler Durden: Man, I see in fight club the strongest and smartest men who've ever lived. I see all this potential, and I see squandering. God damn it, an entire generation pumping gas, waiting tables; slaves with white collars. Advertising has us chasing cars and clothes, working jobs we hate so we can buy shit we don't need. We're the middle children of history, man. No purpose or place. We have no Great War. No Great Depression. Our Great War's a spiritual war... our Great Depression is our lives. We've all been raised on television to believe that one day we'd all be millionaires, and movie gods, and rock stars. But we won't. And we're slowly learning that fact. And we're very, very pissed off.
Tyler Durden: Warning: If you are reading this then this warning is for you. Every word you read of this useless fine print is another second off your life. Don't you have other things to do? Is your life so empty that you honestly can't think of a better way to spend these moments? Or are you so impressed with authority that you give respect and credence to all that claim it? Do you read everything you're supposed to read? Do you think every thing you're supposed to think? Buy what you're told to want? Get out of your apartment. Meet a member of the opposite sex. Stop the excessive shopping and masturbation. Quit your job. Start a fight. Prove you're alive. If you don't claim your humanity you will become a statistic. You have been warned- Tyler.
Tyler Durden: You're not your job. You're not how much money you have in the bank. You're not the car you drive. You're not the contents of your wallet. You're not your fucking khakis. You're the all-singing, all-dancing crap of the world.
Tyler Durden: [pointing at an emergency instruction manual on a plane] You know why they put oxygen masks on planes?
Narrator: So you can breathe.
Tyler Durden: Oxygen gets you high. In a catastrophic emergency, you're taking giant panicked breaths. Suddenly you become euphoric, docile. You accept your fate. It's all right here. Emergency water landing - 600 miles an hour. Blank faces, calm as Hindu cows.
Narrator: That's, um... That's an interesting theory.
Narrator: If you wake up at a different time in a different place, could you wake up as a different person?
Narrator: Bob is dead, they shot him in the head!
Tyler Durden: You wanna make an omelet, you gotta break some eggs.