Listen to the audio file “Theatre” and answer the questions:

ex. 1 Practice pronunciation of these words:
proscenium, amphitheater, booth, personnel, rehearsal, audience, arch, parterre, parquet, balcony, grand circle, loge, mezzanine, prestigious, dignitary, modular, hydralic pylons, venue, Edinburgh
ex. 2 What do you know about the structure of the theatre? What principle parts and their functions can you name?
ex. 3 Read the text
Basic elements of a theater structure
On and off stage
The most important of these areas is the acting space generally known as the stage. In some theaters, specifically proscenium theaters, arena theaters and amphitheaters, this area is permanent part of the structure. In a blackbox theater the acting area is undefined so that each theater may adapt specifically to a production.
In addition to these acting spaces, there may be offstage spaces as well. These include wings on either side of a proscenium stage (called "backstage" or "offstage") where props, sets and scenery may be stored as well as a place for actors awaiting an entrance. A Prompter's box may be found backstage. In an amphitheater, an area behind the stage may be designated for such uses while a blackbox theater may have spaces outside of the actual theater designated for such uses.
Often a theater will incorporate other spaces intended for the performers and other personnel. A booth facing the stage may be incorporated into the house where lighting and sound personnel may view the show and run their respective instruments. Other rooms in the building may be used for dressing rooms, rehearsal rooms, spaces for constructing sets, props and costumes, as well as storage. 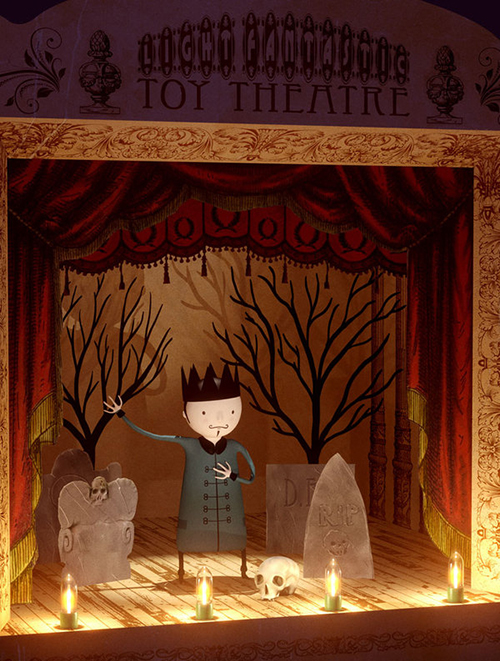 Seating and audience
All theaters provide a space for an audience. The audience is usually separated from the performers by the proscenium arch. In proscenium theaters and amphitheaters, the proscenium arch, like the stage, is a permanent feature of the structure. This area is known as the auditorium or the house. Like the stage in a blackbox theater, this area is also defined by the production.
The seating areas can include some or all of the following:
Stalls or arena: the lower flat area, usually below or at the same level as the stage. The word parterre (occasionally, parquet) is sometimes used to refer to a particular subset of this area. In North American usage this is usually the rear seating block beneath the gallery in the orchestra stalls whereas Britain it can mean either the area immediately in front of the orchestra, or the whole of the stalls. The term can also refer to the side stalls in some usages. Derived from the gardening term parterre, the usage refers to the sectioned pattern of both the seats of an auditorium and of the planted beds seen in garden construction. Throughout the 18th century the term was also used to refer to the theater audience who occupied the parterre.
Balconies or galleries: one or more raised seating platforms towards the rear of the auditorium. In larger theaters, multiple levels are stacked vertically above or behind the stalls. The first level is usually called the dress circle or grand circle. The next level may be the loge, from the French version of loggia. A second tier inserted beneath the main balcony may be the mezzanine. The highest platform, or upper circle, is sometimes known as the gods, especially in large opera houses, where the seats can be very high and a long distance from the stage.
Boxes (state box or stage box): typically placed immediately to the front, side and above the level of the stage. They are often separate rooms with an open viewing area, which typically seat up to five people. These seats are typically considered the most prestigious of the house. A "state box" or "royal box" is sometimes provided for dignitaries.
Contemporary theaters
Contemporary theaters are often non-traditional, such as very adaptable spaces, or theaters where audience and performers are not separated. A major example of this is the modular theater, (see for example the Walt Disney Modular Theater). This large theater has floors and walls divided into small movable sections, with the floor sections on adjustable hydraulic pylons, so that the space may be adjusted into any configuration for each individual play. As new styles of theater performance have evolved, so has the desire to improve or recreate performance venues. This applies equally to artistic and presentation techniques, such as stage lighting.
Specific designs of contemporary live theaters include proscenium, thrust, black box theater, theater in the round, amphitheater, and arena. Theatrical performances can also take place in venues adapted from other purposes, such as train carriages. In recent years the Edinburgh Fringe has seen performances in an elevator and a taxi.
ex. 4 Explain these words or give synonyms
offstage space
props
scenery
rehearsal room
auditorium
rear
occupy
tier
the gods
dignitary
adjustable
venue
contemporary
ex. 5 Finish the sentences
ex. 6 Make derivatives
space; store; stage; produce; separate; define; include; adapt; adjust; move; evolve, perform; create; art
ex. 7 Make your own sentences
props
to store
to incorporate
rear
adjustable
venue
contemporary
ex. 8 Answer the questions
ex. 9 Discuss the following
Theatre is life. Cinema is art. Television is furniture.
All the world's a stage and the men and women on it merely players. ~Shakespeare
You need three things in the theatre -- the play, the actors and the audience, and each must give something. ~Kenneth Haigh
"I regard the theatre as the greatest of all art forms, the most immediate way in which a human being can share with another the sense of what it is to be a human being." ~Oscar Wilde
Theatre exists only because it is overwhelming, because its acting is astonishing. Where a theatre and its acting are merely 'good,' merely 'correct,' merely 'in the proper style,' theatre dies a slow death. ~Robert Cohen
The theatre, when all is said and done, is not life in miniature, but life enormously magnified, life hideously exaggerated. ~H. L. Mencken